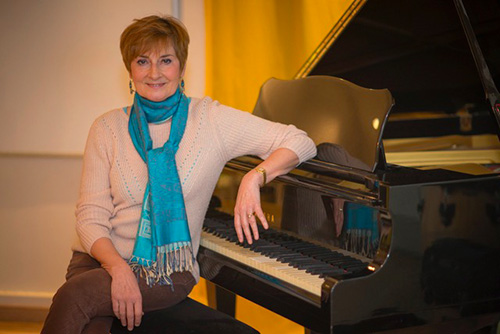 Born in Hungary, pianist Agnes Evesque graduated from the Gyor Conservatory. She then went to Austria where she studied at the Music Academy in Vienna, obtaining her D.F.E. in 1974. From 1975 to 1979 she taught at the Vienna Municipal Conservatory and continued her piano studies with Guido Agosti at the Chigiana Academy in Siena.

Agnes has performed in recitals and as a chamber musician with many soloists including the Vienna Kammerensemble.

Since 1978, she has performed in duo with the pianist Denis Evesque, participating in numerous festivals in France and in many countries in Eastern, Western and Central Europe, notably the Austrian Summer Festival in Vienna, the Spanish Festival in Pal and the “Flaneries Musicales” in Reims. She has also recorded for radio in various countries. Agnes has been teaching piano at l’ Ecole Koenig since 1997.